Last week we took the Class Leaders from Year 7 and 8 to the Town Hall for National Young Leaders Day. It is the longest running leadership event for primary and intermediate students in the country. They were absolutely bursting with excitement and inspiration after dancing with and meeting the speakers at the end of the day.

Here are some of the messages the students took away from the presentations:

“It was such a fun, funny and inspiring day, filled with quotes, jokes and music.

We learnt about the word ‘whakarongo’ which means listen. Then we broke it down. it made us all want to push to be the best we can be and to help others do the same.”   Aila Armstrong (Year 8)

“I’ve realised that you can do anything when you’re young and even if you get abused you can still keep going.”  Brent Managan (Year 7)

“It was such an amazing experience and I’m so grateful to be able to attend. The day was filled with humour and very inspiring people like Ronnie Taulafo off What Now, Christian Gallen and New Zealand singer Kings. He performed and we also got some sick photos at the end.”  Ruby de Graaf (Year 8)

"There was a video of a girl named Lucy Gray (12) and she fully organised the Christchurch climate change student strike. (Check the video out on Youtube)."   Gabriel Lindsay (Year 7)

"NYLD was a great experience for me as a class leader. It taught me about the responsibilities of a leader and how to be an even better leader. Listening to all of the leaders of NYLD really opened up the whole world of leading for me and others."

Sala Tiatia probably inspired me the most, talking about his life story and how he brought positivity to his family. So he encouraged me to be more positive to everybody. Same with Christian Gallen, he was an all round positive guy and would be a great friend for everybody.

I really think other students should start in the leading experience now to try new things and learn about leading in general, so they to can be inspired to become more successful in leading careers."   Luca Phillips (Year 7) 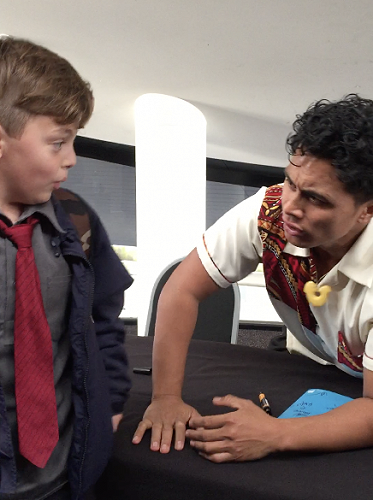