Michael Louw-Young headed to Whakatane in the 2nd week of the July Holidays to compete in the 2018 NZ Jnr and Youth Darts Championships. She was one of two Junior players and three Youth players to attend from Otago. Michael went with reasonably low expectations given that she has only been playing darts for a year. This was her first championship and she went hoping to come back having gained more experience, and having a better insight into what the Championships were all about.

The Tournament was played over three days. The first day saw her playing in the Junior Pairs with her Otago counterpart. The girls qualified in the top 16 and then went on to win their next three games putting them in the semi-finals, which they lost and ended up with an extremely commendable 3rd equal. Day two saw Michael playing Junior Singles. She qualified in the top 16 and then was unfortunate to be pitted against the defending Champion (who is a National Woman's Representative). Michael very nearly won the match, missing her double that would have ensured a win. On day three, based on her performance in her singles match the previous day, Michael was selected for the New Zealand Jnr Rep team. She played her first game for the team at the end of the day, which she won. She came away from the Tournament with far more than she expected, and now has a ranking of 4th in New Zealand. 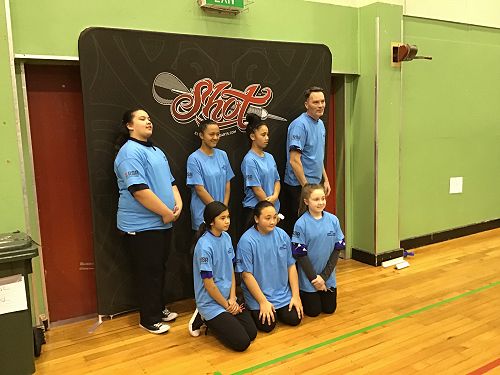