On Waitangi Day five senior students, Ms Larsen, and I travelled to Ōtākou Marae to take part in the Waitangi Day celebrations.

Upon arrival, we waited apprehensively with all the manuhiri for the karanga to begin, and the crowd numbered hundreds of people. We were warmly welcomed by Ngāi Tahu kaumatua Edward Ellison, the first kaikōrero on the Marae ātea. Then several speakers replied from the Manuhiri side. The distinguished visitors were treated to a hākari, and the minenga, “us hordes”, were given a snack too.

The theme this year was “Ngā Tohu Rangatira” (the Signatories) a booklet was distributed by Te Rūnanga o Ngāi Tahu. This included an account of how the Treaty was brought to the South Island on board the HMS Herald and tells which Ngāi Tahu Rakatira signed the treaty, and where and when they signed Te Tiriti o Waitangi. Several experts also gave a talk about this kaupapa at 1pm.

After the pōwhiri a great afternoon of entertainment started on the lower grounds in front of the Marae. This included two of Kavanagh’s teachers Pesamino and Michelle Tili leading the Kia Orana Cook Island performing arts group. There was also a variety of delicious kai stalls on site. Eternal, Liana and Siobhan decided to brave the icy cold waters for a dip in the harbour. Our two ESOL students who had just arrived from tropical Thailand must have thought they were completely pōrangi. It was an enjoyable day. Ngā mihi nunui ki te haukāinga i te manaakitanga nei. 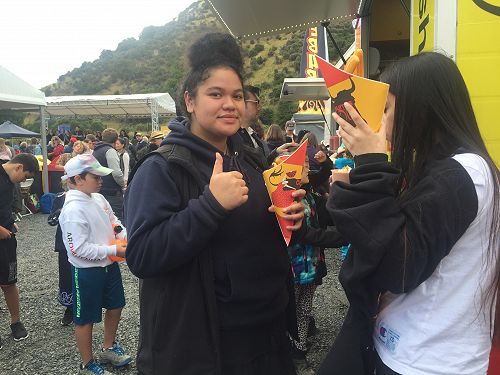 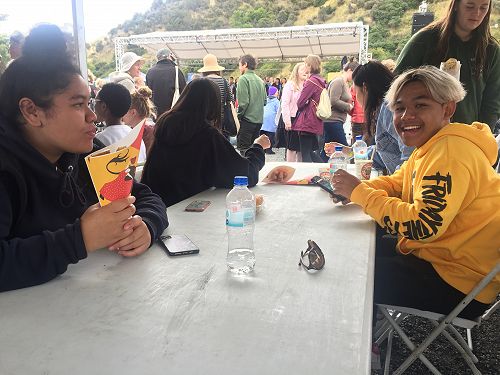